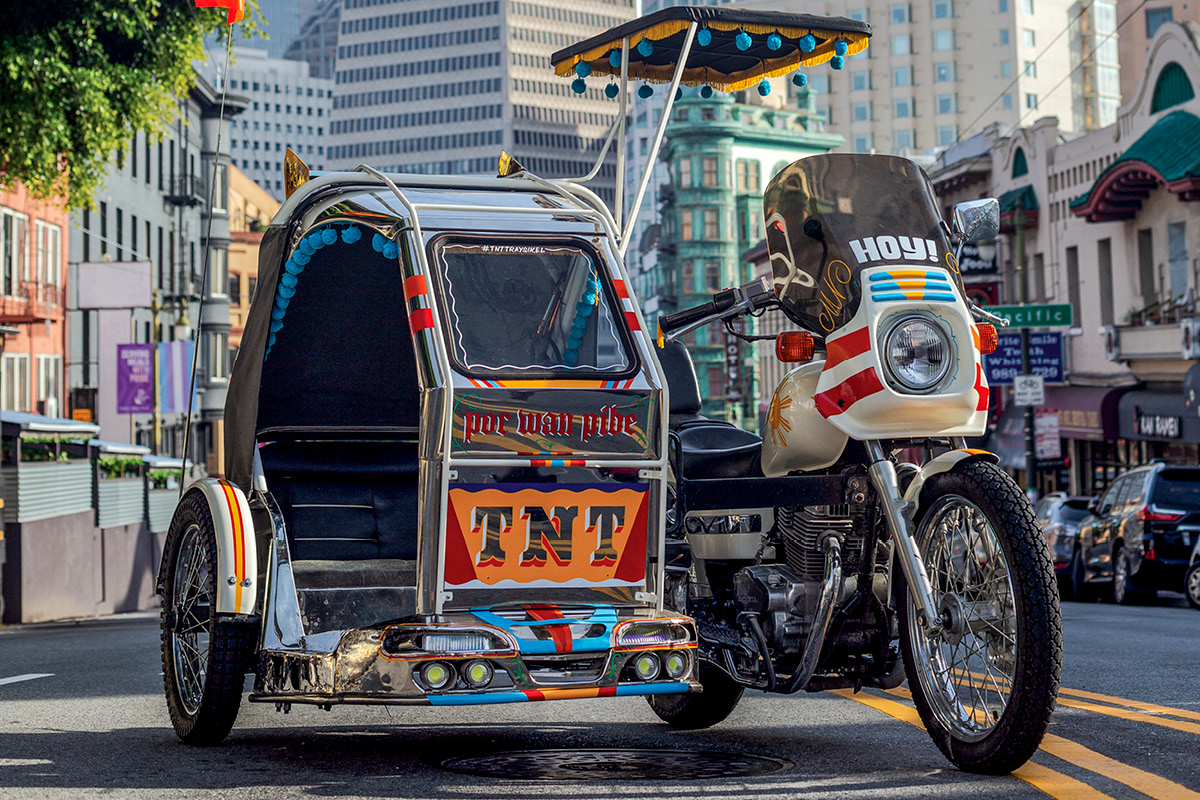 A loud and colorful vehicle is turning heads all over the Bay Area while also spurring conversations on immigration and colonialism. San Francisco State University Associate Professor Michael Arcega is one of two artists at the helm of the TNT Traysikel, a custom-painted 2003 Honda Rebel motorcycle connected to a tricycle sidecar outfitted with a karaoke machine and flashing lights.

Built with grants from several organizations, including the San Francisco Arts Commission and San Francisco State’s College of Liberal & Creative Arts, the TNT Traysikel is more than a cool ride. Created by Arcega and independent filmmaker Paolo Asuncion, it’s a new piece of art based upon a familiar mode of transportation in the Philippines.

“We get a lot of thumbs up. Filipinos recognize it immediately. They go so far as stopping traffic to acknowledge us, or want to take a picture, flagging us down,” said Arcega, who teaches in the SF State School of Art.

Motorized tricycles are a common sight on the streets and roads of the Philippines, Arcega and Asuncion explain. Both men grew up in the Philippines and say they relished every opportunity to ride the tricycles before immigrating to the U.S.”

TNT Traysikel is not the kind of car restoration shown on reality television. A distinctly Filipino object in a distinctly American city, it is designated by the South of Market Pilipinas Cultural Heritage District as an official cultural marker. It is a symbol of immigration, Filipino American achievement, displacement and structural racism. “TNT” stands for Tago ng Tago, a Tagalog phrase that translates to “always hiding”; it is used to describe an undocumented person.

Arcega and Asuncion purchased the sidecar, made by a small manufacturer named Hercules, from a pastor who had imported it from the Philippines. They enlisted the Handsome Asians Motorcycle Club for repairs and Bay Area sign designer Michelle “Meng” Nguyen (B.S., ’12) for painting. Much of the construction was done in the sculpture area in the Fine Arts Building in summer 2019.

Wherever the sputtering vehicle goes, its karaoke machine is the biggest crowd pleaser. This year, dozens of people have sung along at events at the Exploratorium, SFMOMA, Portsmouth Square, Kapwa Gardens and St. Joseph’s Art Society. It has brought the community together in a safe, judgment-free environment during a pandemic. The Fugees’ “Killing Me Softly With His Song,” Journey’s “Don’t Stop Believin’” and Frank Sinatra’s “My Way” are among the most popular karaoke numbers.

When the songs end, “SideCaraoke” transforms into “Taxicab Confessions,” as Asuncion describes it. People open up to talk about their lived experiences from the Philippines to the U.S. Soon, these stories and songs will appear in a documentary series directed by Asuncion and funded with a second grant from the San Francisco Arts Commission.

“Folks who are homesick or just haven’t been to the Philippines in a while see TNT Traysikel, and immediately they are transported back to where they last saw one or their last ride,” Arcega said. “It’s familiar, it’s comforting, it eases you, it grounds you. It’s like this conceptual, emotional hug.”

Arcega is known to tap into students’ emotions beyond the confines of the art studio. Before the pandemic, one week of his art installation class would be held inside of an inflatable sculpture as big as 30 feet by 30 feet — created together by the students and blown up on the Fine Arts Building patio. In his nautical art class, students floated their work on Lake Merced near campus. He has also taken his students horseback riding on top of the ocean cliffs of Daly City.

His field trips get students to try something new and meaningful, he explains.

“I don’t want have this just disappear as a blip in their recent lives, but rather as an experience that can be drawn upon. And that then can be another cue for them to explore their new experiences, and draw and introduce into their work,” Arcega said. “Overall, it adds a levity to the class. It creates a trust among the class at having bonded over something. Then you can really get into the heavy topics that some students need, want and make work around. It adds to the health of the community.”

You can see (and hear!) the TNT Traysikel in action below.