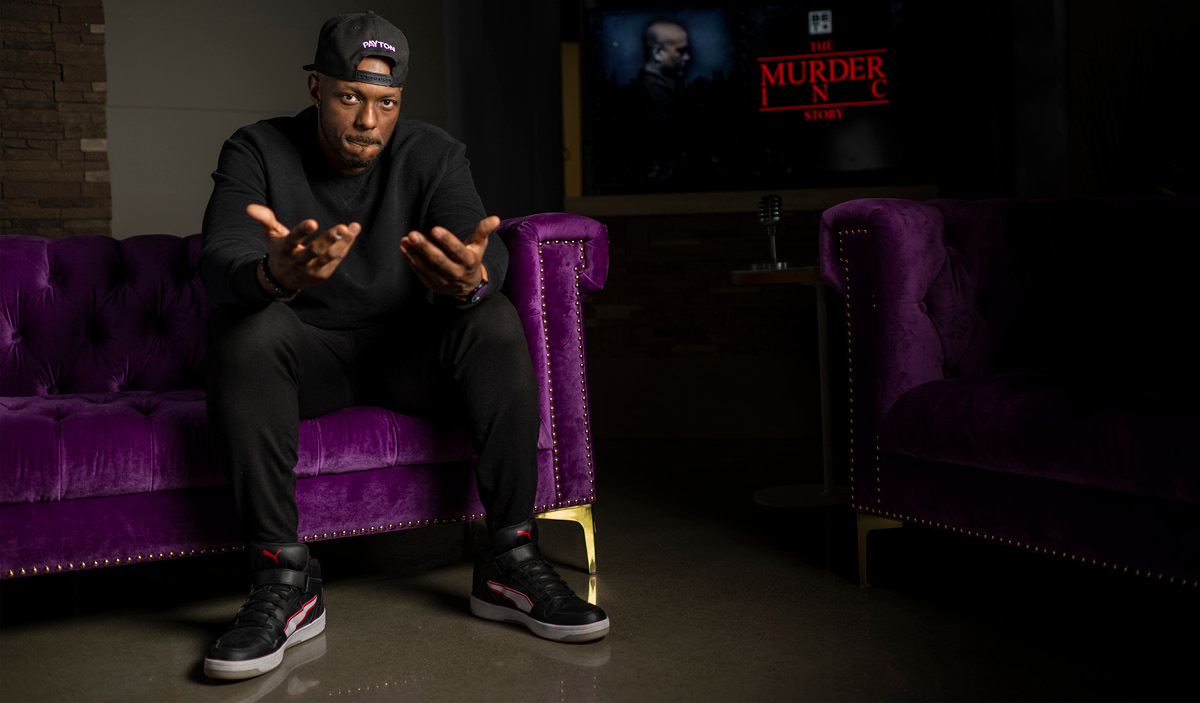 When SF State graduate Michael J. Payton posted a YouTube video about hip-hop record label Murder Inc four years ago, he didn’t expect it would get him hired as director of the official docuseries for national television. But it did.

“The Murder Inc Story” premiered on Black Entertainment Television (BET) on Aug. 9 and hit No. 3 trending on Twitter. Payton (B.A., ’15) directed all five of the one-hour episodes and interviewed icons like Ja Rule, Jay-Z, Nas and Daymond John.

In early 2019, label founder Irv “Gotti” Lorenzo posted an all-points bulletin to his 1 million Instagram followers: “Whoever knows Michael Payton. Let him know to reach out to me. ’Cause I am gonna let him be [a part] of the Big Official Documentary.”

That same night, they connected over the phone and Gotti tapped Payton to direct the series.

Murder Inc recording artists like Ja Rule, Ashanti and Lloyd dominated the charts in the early 2000s, shattering Guinness World Records. Federal money laundering charges against Gotti and his brother would contribute to a fast downfall, though they were acquitted. The music retains legacy and influence, as it has for Payton since age 12.

“I remember being enamored with their mystique and the whole brand,” says Payton, who grew up in Oakland. “It’s really a story of hope [and] belief in oneself. That’s one of the things I’m most fascinated by with hip-hop culture. It was all from the minds of very young people who had nothing. If you believe and have a passion and work hard, you can change the world.”

After high school, Payton selected SF State for its audio production and music recording program in the Broadcast and Electronic Communication Arts (BECA) Department. He discovered a hip-hop community that would shape his career and provide him with a deep scholarly understanding of the genre he loves.

He took Africana Studies courses with Dawn-Elissa Fischer, an anthropologist renowned for her research of hip-hop and other aspects of Black popular culture.

“He is a great communicator and peer educator,” Fischer says. “He created pathways and opportunities for many students, and he has continued to do so for those who came to SF State after him.”

In the Africana Studies Department’s Hip-Hop Workshop course, he served as assistant to Fischer and Dave “Davey D” Cook. Davey D and Payton reunited for “The Murder Inc Story,” where Davey D appears as a historian.

“[Including him in the docuseries] was one of my proudest moments,” Payton says. “He was a big anchor for a lot of the cultural context in this story, and BET just loved him and his contribution.”

Commuting from Antioch, Payton would arrive on campus early in the morning and stay as late as possible. He was active in the Black Student Union and was general manager of student radio station KSFS and booked shows at The Depot. His weekly “Turn Up at The Depot” event allowed student rappers (including himself), DJs and bands to perform alongside notable artists. He was having the time of his life and recorded an EP titled “19th and Holloway.”

“There’s nothing like walking from Parkmerced to Stonestown late on a Friday night with your friends,” he says. “I wanted to capture that vibe in that EP. To this day, I still go back and listen to it and feel the same feels that I felt back then.”

A scholarship from Jay-Z’s Shawn Carter Foundation helped make it possible for Payton to attend SF State. When they met for an interview for “The Murder Inc Story,” Jay-Z was so excited that he called his mother when the cameras stopped rolling: “Mom, look at this young man who we put through school! He is now working with BET!’”

Payton is now working on a project for the Shawn Carter Foundation’s 20th anniversary. Payton is also slated to direct a docuseries about women’s contributions to hip-hop and executive produce a documentary about jailed drug lord Kenneth “Supreme” McGriff.

Payton emphasizes that he aims for all of his work to be a catalyst for change and community involvement. “I always want to make sure we’re able to weave in things that are going to start necessary conversations,” says Payton, who earned his master’s degree from New York University and served as an executive fellow for the governor’s California Volunteers initiative. “It’s not just these people [who] made cool music and this cool thing they did. No, let’s also dig deeper into these stories of why and how and give that cultural context.”