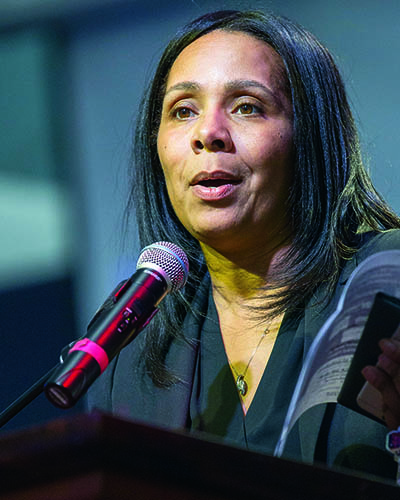 I was born in a little town in Texas. I don’t have a Southern accent but I do have a Southern education. Even though I didn’t go to school in the South, some of my most memorable lessons are from my days in Denison, Texas, with my maternal grandmother. There, I witnessed social justice and advocacy in action, firsthand.

I transferred from UC Davis to San Francisco State University in the fall of 1988. I had no idea what I wanted to do. I was entering my third year of college and hadn’t even declared a major yet. I was going through the motions until “That Class.” I think it was History 450, or maybe it was CA History 450. I don’t recall the exact name, but I do remember the moment when something clicked. It was all of a sudden, in that class, as they talked about the Missions and the impact of colonization on the indigenous people. For the first time, I heard the story from a different perspective, and that sparked something in me. In another class, the teacher explained the Emancipation Proclamation, and the idea that Lincoln’s proclamation was more complicated than what I had been previously taught was enlightening.

I declared a major: Liberal Studies. I was nearing the end of my college career, and the question was, “What can I do with a Liberal Studies degree?” A visit to a career fair landed me a fellowship as a kindergarten teaching assistant. I remember my first day. I was sitting in a circle with the students and the teacher said, “Let’s pack up. It’s time to go home.” Time to go? How could it be time to go? I couldn’t believe we had gone through the whole day already.

I worked as a teacher in private schools for over a decade. During the summers I volunteered in community programs to bring resources and fun learning activities to diverse groups of youth. My undergraduate social justice courses, coupled with my teaching credential classes, mixed with lessons of radical simplicity from my grandma, combined to create programming for hundreds of youth in the Western Addition of San Francisco.

My love of education and school teacher proclivities compelled me to expand programming to support youth in the community outside of my school. My community work connected me with other opportunities. I served as a legislative aide for a district supervisor. I launched several projects for the Public Defender’s Office. I ran a community center, and now I serve as the executive director of the San Francisco Human Rights Commission.

Over the past few years, I have been able to lead several efforts in my role at the Human Rights Commission. I have coordinated and facilitated community listening sessions to allocate funds that will support the Black community, hosted webinars to build cross-cultural solidarity and developed training modules to address bias and discrimination. My Southern teachers laid a good foundation, but San Francisco State provided tools and a road map that I still use today to advance change and to address issues of disparities and inequity.

A career highlight was hosting Congressman John Lewis at SF State and distributing copies of his graphic novel “March” to hundreds of youth. Life had come full circle. I was able to share history in the person and presence of a social justice warrior with hundreds of people, in the place where I was inspired to listen, learn and teach.